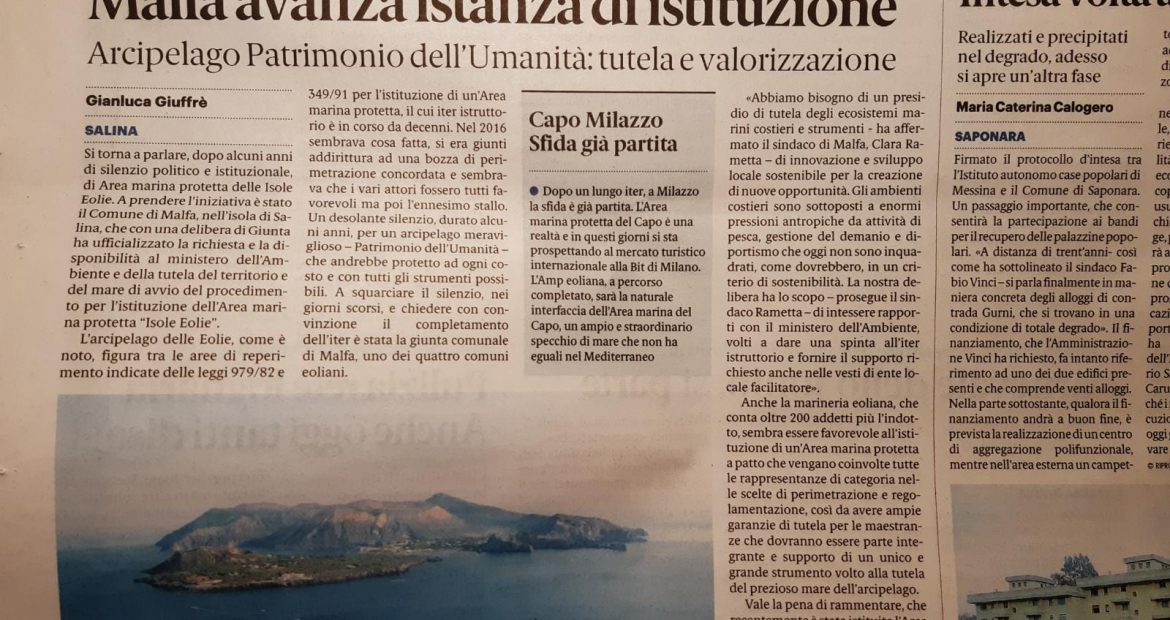 The mayor of Malfa endorses the Aeolian MPA institution: adhesions and reservations. "

The mayor of Malfa endorses the Aeolian MPA institution: adhesions and reservations.

In Salina, after years of political and institutional silence, the Aeolian MPA is back on the agenda. The municipality of Malfa, located in Salina island, has requested that the Ministry of the Environment goes ahead with the procedures for the institution of the Aeolian MPA.

The Aeolian archipelago is on the list of the potential Italian MPA’s under the laws 979/82 and 349/91. This means that the institution is under progress. In 2016, the Aeolian MPA seemed almost sure, as a draft of the special plan was presented. But there was another stall – a bleak silence lasting some years – neglecting an incredible archipelago, a UNESCO Wold Heritage Site, which should have been protected already at all costs and with all instruments available.

To break in the deadlock was down to the mayor of Malfa, one of the 4 Aeolian municipalities, which strongly asks the completion of the establishment process. “We need a presidium to safeguard the marine ecosystem, as well as innovative tools to promote local sustainable development and to boost new opportunities” stated the mayor of Malfa, Clara Rametta. “Coastal environments are subjected to huge anthropic pressures: fishing and recreational activities, which today are not as regulated or as sustainable as they should be.”

We resolve to strengthen relations with the Ministry of the Environment and to push the institutional procedure by providing the support needed as local facilitator.

Also, the Aeolian small-scale fishermen’s group of more than 200 people appears favourable to the institution of the MPA. They will be involved in the zonation plan and regulations, for them to have guarantees for their livelihoods and be part of the whole process to safeguard the Aeolian sea.

We have to remind ourselves that recently an MPA was instituted in Capo Milazzo, with which the Aeolian MPA can interact creating a unique protected environment in the Sicilian Tyrrhenian Sea.

The municipality of Malfa is ready for the creation of an Aeolian Marine Protected Area and a municipal act authorizes the mayor Clara Rametta to deal with the Ministry of the Environment. The other municipalities of the islands, although being supportive in theory, they proceed slowly and with caution. Domenico Arabia, mayor of Santa Marina: “The protection of the environment is necessarily linked to the creation of an MPA, involving the local community and the municipality in the process, but also the other municipalities for the purpose of managing and monitoring/patroling. The MPA should not be interpreted as a limitation but as an opportunity of development for the categories, such as the fishermen that today suffer the consequences of the European and national political choices. These areas of repopulation could allow the fishermen to become guardians of their sea. But these kinds of decisions have to be agreed and discussed and speaking about forthcoming MPA creation is premature.”

Giacomo Montecristo, Mayor of Leni: “The creation and management of an MPA is a delicate issue and should be treated with institutional respect. Currently I don’t think it’s an urgent topic. I have no prejudice towards possible solutions to safeguard the environment and the territory, but such a delicate issue deserves appropriate times and ways, agreed with the interested parties.

Marco Giorgianni, mayor of Lipari, who is in favor of an MPA in principle: “Only once official scientific studies will be published and official information about the economic impact will be shared with the local administrations, we would be ready to open the consultations with the territory. Within the categories of the fishermen conflicting opinions still exist”. 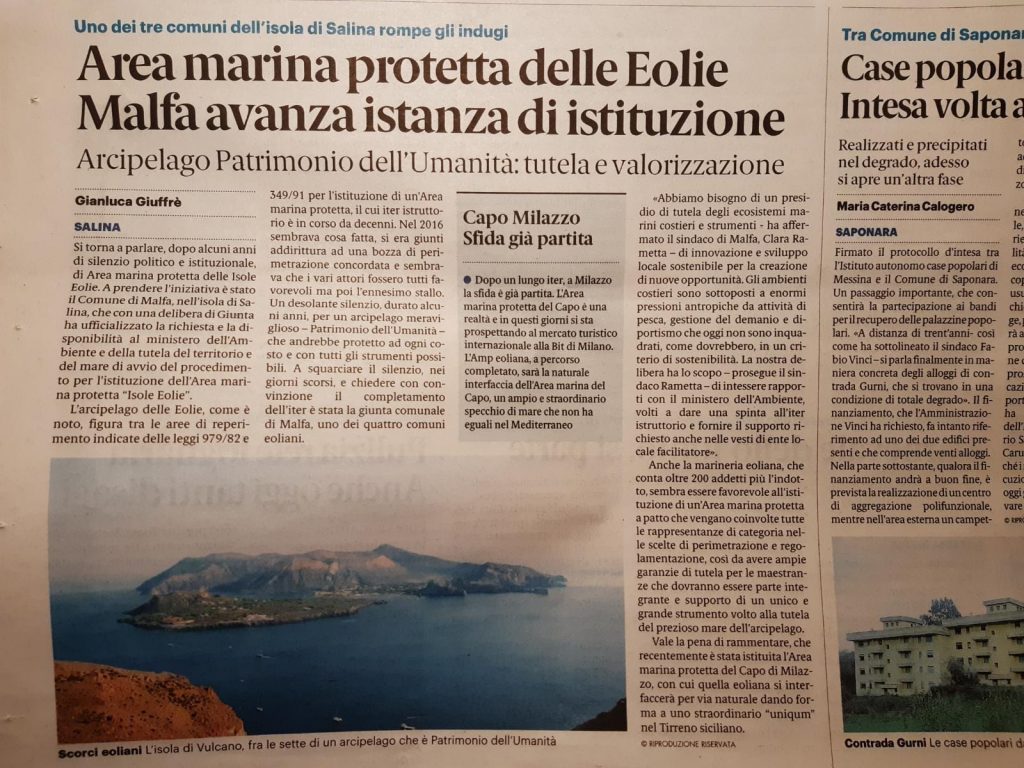